The American Helicopter Museum and Education Center is the nation’s premier aviation museum devoted exclusively to helicopters. We collect, restore and display historic aircraft and chronicle the origin and development of rotary wing aircraft.

Currently, the Museum displays over 35 civilian and military helicopters, autogiros and convertaplanes. The exhibits span the history of rotary wing aircraft from the earliest helicopters to the latest addition to our nation’s defense, the V-22 Osprey. 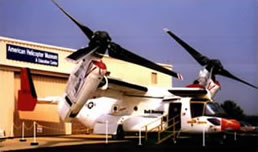 Home of the nation’s largest collection of helicopters.

Through our library’s continually growing collection of documents, artifacts, films, memoirs and research the Museum serves as an important source of public information about rotary wing aircraft.

No other mode of transportation can rival the versatility and ease-of-access offered by the helicopter especially in its use by the military and in its life-saving rescue and medical evaluation applications.

Appropriately the Museum is located in suburban Philadelphia where two of today’s major helicopter manufacturers have their roots, and where much of the earliest development of helicopters in the U.S took place.