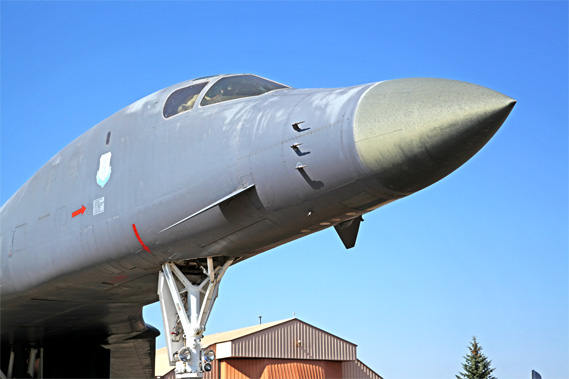 The B-1B is a multi-role, long-range bomber, capable of flying intercontinental missions without refueling, then penetrating present and predicted sophisticated enemy defenses. It can perform a variety of missions, including that of a conventional weapons carrier for theater operations.

The B-1B is a multi-role, long-range bomber, capable of flying intercontinental missions without refueling, then penetrating present and predicted sophisticated enemy defenses. It can perform a variety of missions, including that of a conventional weapons carrier for theater operations.

The swing-wing design and turbofan engines not only provide greater range and high speed at low levels but they also enhance the bomber’s survivability. Wing sweep at the full-forward position allows a short takeoff roll and a fast base-escape profile for airfields under attack. Once airborne, the wings are positioned for maximum cruise distance or high-speed penetration.

Included in the B-1B offensive avionics are modular electronics that allow maintenance personnel to precisely identify technical difficulties and replace avionics components in a fast, efficient manner on the ground.

The aircraft’s AN/ALQ 161A defensive avionics is a comprehensive electronic counter-measures package that detects and counters enemy radar threats. It also has the capability to detect and counter missiles attacking from the rear. It defends the aircraft by applying the appropriate counter-measures, such as electronic jamming or dispensing expendable chaff and flares. Similar to the offensive avionics, the defensive suite has a re-programmable design that allows in-flight changes to be made to counter new or changing threats.

The B-1B represents a major upgrade in U.S. long-range capabilities over the aging B-52 — the previous mainstay of the bomber fleet. Significant advantages include:

* Ability to fly lower and faster while carrying a larger payload.

Numerous sustainment and upgrade modifications are ongoing or under study for the B-1B aircraft. A large portion of these modifications which are designed to increase the combat capability are known as the conventional mission upgrade program. This three phase program will increase the lethality, survivability and supportabilty of the B-1B fleet. Phase I of the program, scheduled for completion by the end of FY 96, will add the capability to release cluster bomb unit weapons. Phases II and III will further upgrade the B-1B capability, to include the ability to deliver joint direct attack munitions ans standoff weapons.

The B-1B holds several world records for speed, payload and distance. The National Aeronautic Association recognized the B-1B for completing one of the 10 most memorable record flights for 1994.

Unit Cost: $200-plus million per aircraft 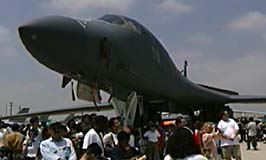 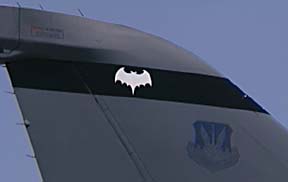